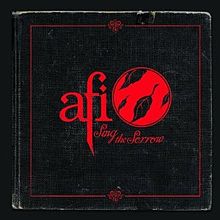 Sing the Sorrow is the sixth studio album by American rock band AFI. It was released on March 11, 2003 through (now defunct) DreamWorks Records. Recorded at Cello Studios in Los Angeles, California between 2002 and 2003, the album was produced by Jerry Finn and Butch Vig. Musically, Sing the Sorrow is a departure from the hardcore punk and horror punk genres established through the band’s previous material, with the album primarily using influences of alternative rock and post-hardcore, as well as incorporating more experimental sounds, including synthesizers, strings and samples. Lyrically, the album is darker and more poetic than previous material, with the inclusion of a hidden track containing a spoken word poem accompanied by piano keys and distorted synth sounds.

Sing the Sorrow received critical acclaim from music critics, who praised its melodies and musicianship, as well as its mature sound in comparison to the band’s previous material. The album was a commercial success, reaching number 5 on the Billboard 200 in the United States, as well as peaking within the charts of Canada and the United Kingdom. It has since been certified Platinum by the Recording Industry Association of America (RIAA), as well as being certified Platinum in Canada. The album was supported by three singles: “Girl’s Not Grey”, “The Leaving Song Pt. II” and “Silver and Cold”, which have since successfully charted within the Alternative Songs and Rock Songs charts.