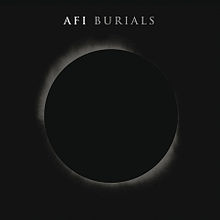 Crash Love is the forthcoming ninth studio album by the American rock band AFI. It will be released on October 22, 2013 through Republic Records.

In a statement regarding the album, AFI frontman Davey Havok said, “This record is of silence, of burials, and the burials that result from that silence. It’s of betrayal, cruelty, weakness, anxiety, panic – deep and slow – despair, injury and loss. And in this it is shamefully honest and resolutely unforgiving”.